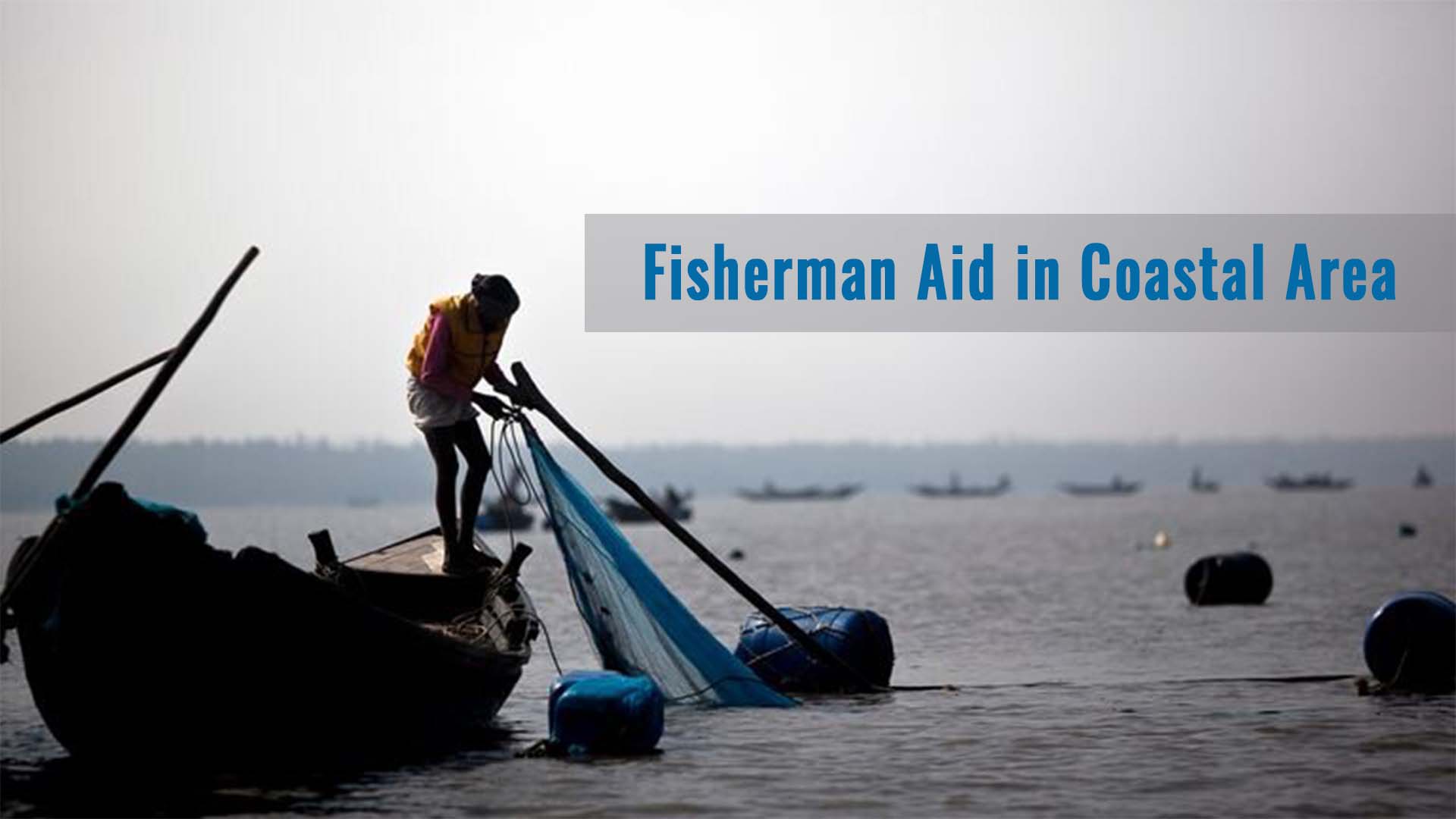 This projects are covered for coastal small-scale fisheries of Bangladesh, a community with low incomes, poor infrastructure and high dependence on natural resources for livelihoods. Bangladesh and its fisheries sector are victims of global climate variability and change. The coastal small-scale fisheries support the livelihoods of approximately half a million fisher-folk and their household members. These fisher-folk catch Approximate 93% of the total marine catch of Bangladesh.

Most fishery-dependent people live in the coastal low-lying areas which are highly unprotected to climate change impacts. While their livelihoods are obstructed by many climate shocks and stresses such as cyclones, floods and sea level rise, their fishing activities are impacted mainly by cyclones in the Bay of Bengal. There have been more cyclones in the Bay of Bengal and they will be more common in future due to climate change. We observed a reduction of fishing days in Bangladesh due to cyclones and greater fluctuation in fish production may occur due to climate change and govt. are also restricted or banned catching fish some specific day . Taken together, these effects may further increase livelihood vulnerability in Bangladeshi coastal fishing communities without adaptation.

The fisher-folks are really leading vulnerable life. For the discussion for their life need to Focus Group Discussion (FGD’s). That’s why we can really be informed and know their current situation.

The Bay of Bengal is a major cyclone prone area in the world. The rate and duration of cyclones have increased over the past 20–30 years. Super cyclonic storms such as Sidr and Gorki prevent completion of fishing trips by destroying fishing assets, killing fishermen, and complicating coping mechanisms at sea and safe return of boats from sea. There is also considered that minor cyclones also constrain fishing activities but to a lesser extent. The cyclones resulted in rough seas with stronger winds and bigger waves. The waves lifted their boat several feet and damaged it.

Two-thirds of the boat captains in fisher-folks communities consider that when attempting to retreat to safe places they are also constrained by hidden sandbars in near shore areas. During cyclonic weather the boat captain could not locate the sandbar as the sea became unclear…their boat stuck into the bar and was damaged by the wave.

Some technological barriers are similar in the all communities while others differ between them. One-third of boat captains in fisher-folk communities, who catch fish in offshore, cannot receive the weather forecast because of absence of radio signal. Their chance of being exposed to cyclones therefore increases and they are not able to return safely to shore in time. Two-thirds of those who catch fish onshore do get radio signal but in most circumstances they cannot return safely in time due to shortcomings in the forecasting of cyclones. Some boat captains and fisher-folks indicate that sometimes there are cyclones in the sea although no forecast is broadcast on the radio. Sometimes when forecasts are broadcast, no cyclone actually occurs. Finally, sometimes forecast comes too late to enable safe return. We had observed that boat captains and fisher-folks heard the forecast too late both in 1991 and 1997. In both cases we experienced huge loss. Hence, inaccurate weather forecast can increase exposure to cyclones.

Oral history interviews highlight that communities when captains feel that a cyclone is going to occur, they abandon the fishing trip and try to return to shore. But boats struggle more to return as well as to stay in the sea during cyclones. A few hours are not enough to return to shore with less powerful engines and without navigational instruments. Their weaker boats are damaged more easily and pose threats to fishing assets and the life of fishermen. Sometimes boats capsize and as 97% of them do not have proper safety equipment (e.g., life jackets), risks to fishermen’s life increase. They rely on inadequate measures such as tying net floats together or using plastic drums or bamboo as floats. Sometimes, it is seen there are no life jacket on the boat and they struggled to idea using floats or plastic drums when a cyclone hit.

Economic barriers are more relevant in fisher-folks communities. In both communities fishermen consider fishing as risky activities due to cyclones and most of them do not want to continue to fish. However a number of barriers prevent them diverting from fishing. They have identified that low incomes and lack of access to credit to invest in alternative livelihood activities are two key barriers. Per capita household income is only around 40,000 TK/year in the communities. To express the level of income, access to credit and desire to divert away from fishing. Some fisherman think that they are poor and do not have sufficient access to credit… fishing in the sea is risky. If they had money they would do business inland as there is no risk on life there.

Boat owners have limited access to formal credit. They indicate that formal sources of credit (banks and NGOs micro-credit) provide only 8% of the credit needed in fishing businesses and charge an interest rate of between 16% and 35% per year. Due to lack of access to formal credit with low interest, the boat owners invest their own savings (provide 12% of total credit) and take informal credit with high interest rates to run their businesses. Local informal money lenders provide 18% of the credit but charge 100% interest per year. Dadondars (another type of informal money lender) provide 62% of the credit but charge 2% on fish revenue equating to an interest rate of between 120% and 240% per year, indirectly. They need to catch considerable amounts of fish during the fishing season to repay the credit and interest and to gain some profit. Catching substantial amounts of fish requires completing most of the fishing trips even in cyclonic conditions, which increases experience to cyclones and the chance of loss of boats, gear and life. To minimize the loss of boats and gear, the boat owners minimize capital investment. Most fishermen said in oral history interviews that boat owners use cheaper and less durable materials to make boats, cheaper and less powerful engines, and do not provide life jackets or modern equipment. This strategy can be treated as maladaptation as it reinforces technological barriers and increases risks for the fishermen.

Social barriers are also more relevant in fisher-folks. Diverting away from fishing activities is constrained, in this communities, by lack of education and skills for alternative livelihoods, and limited availability of alternative livelihood activities. Due to low levels of education people struggle to obtain jobs. Most people have only fishing skills learned from their forefathers. They do not have any other skills than fishing to change their profession. This lack of education and skills is, according to all interviewees, due to low incomes and lack of access to formal credit. Current non-fishery based activities (such as daily laboring) employ people on a part-time basis and are less well paid than fishing, making them less economically viable options.

In both communities, the unfavorable credit schemes reinforce economic barriers. The oral history and FGD participants reported that obtaining formal bank credit requires assets as security, education, knowledge of the credit system and good relationships with credit providers. Almost all fishermen in the communities, most of the boat owners do not have the requirements for obtaining credit. The participants find that obtaining microcredit does not require similar prerequisites but that it poses limitations: low amounts of credit (10,000–30,000 TK), inflexible and frequent (weekly) repayments.

All the fisher folks reported that piracy occurs in some of the fishing areas because of lack of enforcement of maritime laws. The pirates sometimes take money before fishing, rob fish and fishing assets, and keep them on-board as hostages for ransoms. They need to buy 2 tokens as informal money receipts at the cost of 5,000 to 10,000 TK from different groups of pirates in a season to do fishing. In few cases the pirates have killed fishermen and captains if they resist or do not provide ransom. Together, piracy increases investment and incurs economic losses for the fishing business, thereby reinforcing economic barriers.

All participants observed that overfishing has occurred near-shore due to lack of enforcement of fishing regulations. Near-shore overfishing pushes boats further from shore where they are more exposed to cyclones.

All Problem at a glance: Lack of enforcement of fishing regulations also harms safety in boats and reinforces technological barriers. According to the fishing regulations each fishing boat needs to have a license, life-saving equipment for each fisherman, a radio, a transponder (navigation instrument) etc. Yet the authorities frequently ignore the safety code, especially in Coastal Area. Some boat owners manage to license their boats without following the regulations, by corrupting the authorities. Some boats in do not have a licence at all. These boats are hardly monitored at all to check their compliance with regulations.

Lack of access to fish markets makes fishing less profitable and creates pressure to catch more fish. All fish from Coastal area need to be sold in an auction via commissioning agents. If informal credit is taken from a commissioning agent (dadondar) to run the fishing, then the fish must have to be sold, sometimes at lower prices, via that particular agent who charges for both selling the fish and giving credit. This fish marketing system is considered by the boat owners as unfair as it reduces their profit, and ultimately forces the fishermen to maximize the catch.